From very humble beginnings, we have grown to become a nationwide leader in the wireless industry. Russell Cellular is a Verizon Authorized Retailer and “Big 6” agent, with 720+ locations across 43 states, and 2,500+ team members.

9 consecutive wins, inducted into the Inc. Hall of Fame in 2018

#1 in the Dynamic Dozen

One of the “Best Entrepreneurial Companies in America”

Verizon 2018 Partner of the
Year

The Russell Cellular story didn’t begin with a phone. It started with a little ambition on a turkey farm in Arkansas where Jeff Russell worked in the early 1990s. Jeff and his wife, Kym, knew they wanted to own a business and provide opportunities for their young family. So, in 1993, they took a chance to realize their dream and moved to Springfield, Missouri. Jeff answered an ad to sell for Alltel Wireless, and in December of that year, Jeff and Kym opened Russell Cellular as a family business that they ran from their living room. 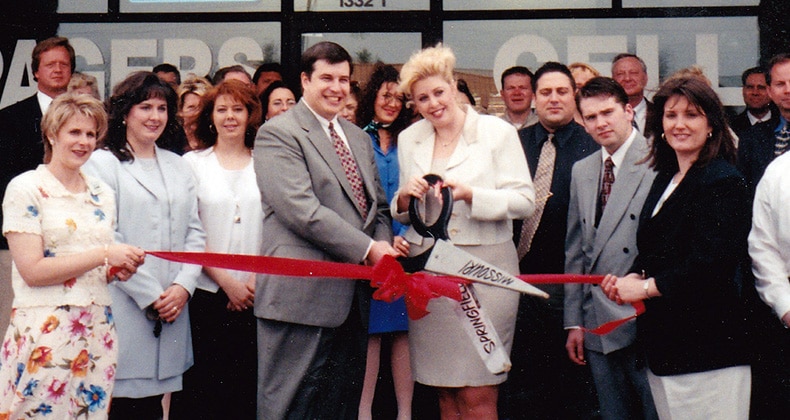 Growing as a family

In June 1994, the first Russell Cellular retail location was opened. As business partners, Jeff and Kym divided the responsibilities of running the company. Jeff handled sales, marketing, and finances, while Kym was responsible for operations, inventory, HR, and payroll. Even their young kids got involved with handing out flyers and performing data entry while helping to set up new locations as the company began to grow.

In 2009, Alltel Wireless was acquired by Verizon Wireless and all Russell Cellular stores were converted to Verizon by the close of 2009. Over the next seven years, Russell Cellular experienced record-breaking sales and growth into new states and Verizon markets, including the Northeast, New York City, and Pennsylvania.

In 2017, Russell Cellular joined the Verizon “Big 6” program, which helped accelerate growth in new markets, including California and Florida. 2018 was a significant year for the company — not only did we celebrate our 25th anniversary and maintain more than 400 stores in 30 states, we were also named the 2018 Verizon Partner of the Year. One year later, Russell Cellular completed its two largest acquisitions, adding 150 retail locations and bringing the total store count to more than 600.

Investing in the future

Having been in business for almost three decades, we have achieved many accomplishments, including being named #1 in the Dynamic Dozen fastest growing companies by the Springfield Business Journal in 2004, 2010, and 2020, and being recognized ten times in the Inc. 5000. In addition, we opened our 40,000 square foot Home Office in December of 2019. The Russell Family attributes the success of the company to the family-like culture established early on, by investing in team members and communities, providing opportunities for team member growth, and maintaining a personal connection with company operations.

Want to search for a different location?